Not only is Spitalfields Arts Market filled with homeless people's art from Monday morning, World Homeless Day, but they're launching the MyLondon calendar to celebrate London.

MyLondon will be launched at 1pm in the middle of the market. Produced with 99 single-use cameras, the calendar is a love letter in photos to the city. Everyone involved is affected by homelessness.

In July 105 people affected by homelessness were given disposable cameras and given five days to capture photos with the theme “My London”.

Over 5,000 photos were produced and 20 were selected for the exhibition. Thirteen are in the 2017 calendar.

On Monday 10 October, World Homeless Day the results of the project, run by London social enterprise Café Art, will be unveiled in an exhibition in Spitalfields Arts Market. As well as a week-long photography exhibition which includes artwork produced by artists affected by homelessness, they will launch the 2017 MyLondon calendar.

The goal of the project is to empower participants affected by homelessness and to highlight the issue of homelessness to the wider public.

The cover photo is by Saffron Saidi. “I was ecstatic, I couldn’t believe that I’d found another Banksy!” says Saffron Saidi. She asked the man who was working at Cargo, Rivington Street, where the street art mural has been since 2001, to hold the lead of her Dalmatian Dotdot: “Another Banksy in Southwark also has a dog with a lead. The barman said that apparently Banksy likes dogs.”

Saffron moved to London from Falmouth in 1996 and lives in Brixton. “I’ve spent most of my life in care. I had a documentary made about me in the ‘90s called Who Cares Wins.”

Saffron got accepted into University of Westminster photography course but had to pull out: “I was diagnosed with learning disabilities which made the academic writing on the course extremely difficult… but my talent as a photographer was never questioned as I had an unconditional offer.” She goes to Cooltan Arts, describing it as “a lifeline”. “It keeps me alive.”

The March photo in the calendar is by Richard Fletcher. Richard, who belongs to community project ARTfitzrovia, spotted a ‘Drivers Wanted’ sign next to a miniature bus in the window of a minicab office on Old Street. ‘I’m sleeping rough,’ said Richard, who shot the image chosen to be used for March. ‘Various places: King’s Cross St Pancras, Victoria… during the summer it’s all right. I had a night shelter in the winter months, which was fine, that I may revert to if I’m still here come October/November… I heard about the photography contest by chance. I was in a McDonald’s late one night in Holborn and this guy walks in and saw me sketching. He was the one who told me about Café Art.’

This is the fourth year the exhibition and calendar have been produced and it has gained a local and international following:

“These photos show, in a small way, that no matter where we are in life, we all have a unique and beautiful viewpoint.” (Upworthy, September 2016)

“MyLondon Film Photographs by the Homeless Continue to Inspire Others” (Lomography.com, August 2016)

See all the media coverage about the contest and Kickstarter here.

Video by UpWorthy of the calendar photos (23 September, 2016)

The calendar will be unveiled at the award ceremony for the MyLondon photography contest at 1pm on World Homeless Day, Monday 10 October, at Spitalfields Arts Market. The market has been given to the social enterprise Café Art for seven days and will be filled with art and photographs by people affected by homelessness from 10am to 5pm every day until Sunday 16 October.

Seven thousand calendars are being printed. Hundreds were pre-sold on Kickstarter in August and September. The remaining calendars will be sold by people affected by homelessness in Spitalfields E1 Market between October and January giving work experience to the participants.

Contact Paul Ryan if you would like to interview any of the project participants. Tel 07517 141948 or email paul@cafeart.org.uk

CAFÉ ART connects people affected by homelessness with the wider community through art. We hang artwork created in art groups run by homelessness sector organisations and hang it in independent cafes in London. We also run photography contests with disposable FujiFilm cameras. 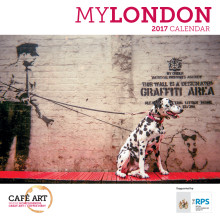