Two hundred single use cameras were given to people who are homeless, or have recently been homeless in London and Brighton in June. The results are two beautiful calendars which will be sold by the photographers.

Participants are involved in the creation of a calendar, which they can sell.

Brighton organiser Lucy Groenewoud says: "Working with those who are homeless or have lived experience of homelessness in Brighton and Hove, we aim to create positive community change through artistic process."

MyBrighton & Hove is working with local homeless services and charities in Brighton and Hove including Passage, Justlife, YMCA, BHA and St John Ambulance. "The calendar makes a difference to homeless people by providing employment and training opportunities, it also improves their confidence and social skills as we include the artists in all aspects of the project," says Groenewoud.

The MyLondon calendar started in 2013 and is now in it's sixth year, being joined by the Brighton project this year. Both are available online now [the Kickstarters are both launching on Wednesday evening and will run for 30 days each].

Over the past five years more than £150,000 has been earned by vendors of the MyLondon calendar which is sold in markets like the Big Issue.

The Brighton calendar is entirely run by volunteers and all the profits will go back to the project after the project participants have been paid. Each photographer earns 50% of the profit from the sale of photographs and those who decide to sell the calendar will earn 50% of the sale price of £10 from October.

"This is not a project about what homelessness looks like," says MyLondon organiser Paul Ryan. "It's a way to create a beautiful calendar with photographers who happen to be homeless or have been homeless."

The project has inspired other cities to do their own ones, and over the years it has been done in Budapest, Sydney, Sao Paulo, New Orleans and Toronto. In October a selection of 20 photographs from these cities, including four photographers from London, will open in an exhibition at the United Nations in Geneva.

Both projects are supported with in-kind support from by Fujifilm UK, Jessops and volunteers from The Royal Photographic Society.

CAFÉ ART connects people affected by homelessness with the wider community through art. We hang artwork created in art groups run by homelessness sector organisations and hang it in independent cafes in London. We also run photography projects with disposable Fujifilm cameras.

Disposable cameras will be given to 100 with a lived experience of homelessness in the MyBrighton & Hove Photo Project at One Church, Brighton on Friday 29 June. Supported by Fujifilm UK and The Royal Photographic Society, the project will result in an exhibition and a calendar. It is run locally by volunteers and social enterprise Cafe Art, and is based on the successful MyLondon project.

100 cameras for Homeless to photograph London

One hundred people affected by homelessness will capture London over five days from today when they are given a disposable camera at St Paul's Cathedral.

Homeless given 100 cameras to capture London - these are the results

The photographers in the MyLondon Photo Project exhibition have all experienced homelessness. The goal of the project was to focus on what they love about London. The exhibition opens in Spitalfields Arts Market, Brushfield Street, on Monday 30 July and is up for 7 days and every photo is for sale, earning money for rough sleepers, sofa surfers and other people who have experienced homelessness. 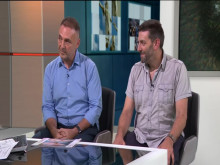 David Fussell is a rough sleeper whose photo of St Paul's Cathedral is December in the 2019 MyLondon calendar. On 30 July he was intervie...