3 September, 2015 - A calendar of photographs taken by London people affected by homelessness in London has gone viral in the past week, prompting worldwide interest.

The Kickstarter campaign for the My London calendar has triggered international interest with the photographs of London being published on many major websites including Huffington Post USA, Upworthy, the NBC Today Show in New York and La Repubblica in Italy.

Director of Café Art Paul Ryan said the response has been incredible, with more than 50 news agencies or websites contacting them to share the photographs following the first article on the UK’s Amateur Photographer website. He said most shared the link to the Kickstarter crowdfunding campaign which is raising money to print the calendar. The initial target has more than doubled with 16 days left to go. The original goal was £4,500 ($7,000) to pay the first instalment on the printing of the calendar. The £12,500 raised so far will pay the entire printing bill and also compensate the photographers. The campaign is only half-way through it's 30-day campaign.

In July 100 FujiFilm single-use cameras were handed out to people affected by homelessness, with the theme My London. The participants were homeless or formerly homeless Londoners, and most came from art groups run by homelessness-sector organisations.

More than 2,400 votes were received for the top 20 photos at Spitalfields Arts Market in early August 2015, with the public being asked to choose the best photos for the 2016 Café Art My London calendar.

Café Art director Paul Ryan said: ‘Our goal is to help empower people affected by homelessness, not only through photography and art, but through connecting with the public.

Dr Michael Pritchard, director-general of The Royal Photographic Society said: Café Art director Paul Ryan said: ‘Café Art has brought photography and the homeless together in a ground-breaking initiative that is bringing real benefit to those participating. The calendar itself brings direct support but, equally important, is the raising of self-esteem and confidence for those taking part. It is a small project but it is making a big difference.’

The Café Art 2016 My London calendar will be launched on Monday 12 October at 1pm in Spitalfields Arts Market, London

CAFÉ ART began in London in early 2012 with one local cafe and one art group run by a homelessness sector organisation. The opportunity was spotted by a volunteer with a St Mungo’s art group near King’s Cross, London. He could see lots of amazing art being created every week. However there was not enough wall space in the charity to hang it – much of the art was put away and not hung on the walls. An idea was born while in a local cafe. It didn’t have any art on the walls…

Cafe Art is run by Paul Ryan, who is one of the founding directors, together with Michael. Café Art registered as a Community Interest Company (CIC) in November 2013, with all profits committed to building up the social enterprise. CICs were established in 2005 specifically for social enterprises where the profits will be reinvested in the business. 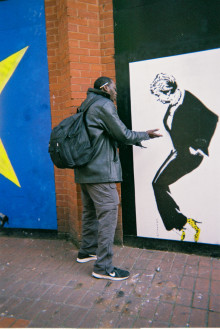 When a Brexit-related photo tops the public vote of photos taken by people who have experienced homelessness, you know it's on everyone's minds. A homeless project which involved giving 100 disposable cameras to people affected by homelessness has created an amazing exhibition which looks at the London in a different way.

Professional photographers and representatives from London's homelessness sector community chose the MyLondon exhibition yesterday in preparation for the annual exhibition and calendar. The social enterprise engaged 105 people affected by homelessness in the first week of July when they picked up disposable cameras and took photos of London over five days.